The roosters woke me up before dawn. I built a little fire in the bbq to make coffee. Sort of smoky but it got the water hot. The old dog hung out, looking hungry. I gave him some tortillas and then reminded myself that all dogs act like they’re starving.

I met the caretaker for an early morning tour of the mission. Interesting tour, complete with conspiracy theories. Por ejemplo – there were tunnels of gold and jewels running beneath the Camino Real. All that treasure got shipped off to Spain. Also, the indigenous Cochimi people could not have been exterminated by diseases, because they were too strong and healthy. And, there are multiple international conglomerates trying to illegally buy up land in Baja California. Okay, that one sounds true. There was more, much more, but Jose Angel was talking too fast for me to keep up. 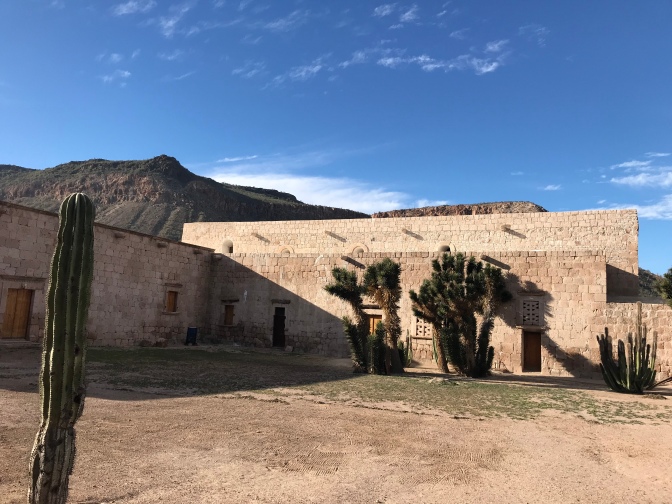 My family and I visited San Borja decades ago. It wasn’t till I got to the courtyard that I could place my memory of being there. Around 2000, the caretaker family had repaired and replaced the roof. I remember on that trip, I hiked up a nearby mesa and fell on a cactus.

As I was leaving San Borja, I ran into caravan of really nice Toyotas. The drivers looked to be older and richer than the surfer crowd, but more off-road than the RV crowd. Did I feel slightly smug alone on my mountain bike? Yes I did. I mean, no, it’s not a contest of who can Baja the best.

I thought the 34 miles to Bahia de Los Angeles would take most of the day. But again, it was a well-maintained dirt road. No major sand or rocky parts. In no time, I was back on blacktop, zooming down the lonely paved road. And I do mean zooming. There was at least five miles of straight downhill, no pedaling necessary. And there was the Sea of Cortez, studded with islands.

My first stop was for shrimp tacos. The woman who cooked them also showed me a quick folding and cutting art activity for kids. Because I’ll be back at work in a mere month and a half. Then headed to the market, where I found another bottle of denatured alcohol to experiment with.

Hotels in Bahia de Los Angeles (BOLA) were expensive and the wifi frustratingly slow. And no cats at my hotel.