I rode about 10 miles to San Jose de Comondú. A steep drop into a canyon bristling with date palms. It was a sleepy mission town. Two tiny old ladies with a really small chihuahua sat chatting on a bench by the plaza. I bought some snacks and had a look at the mission.

The store didn’t have a water machine. I was going to go down to the river to filter water. Then I met some nice girls and they gave me water from their house. 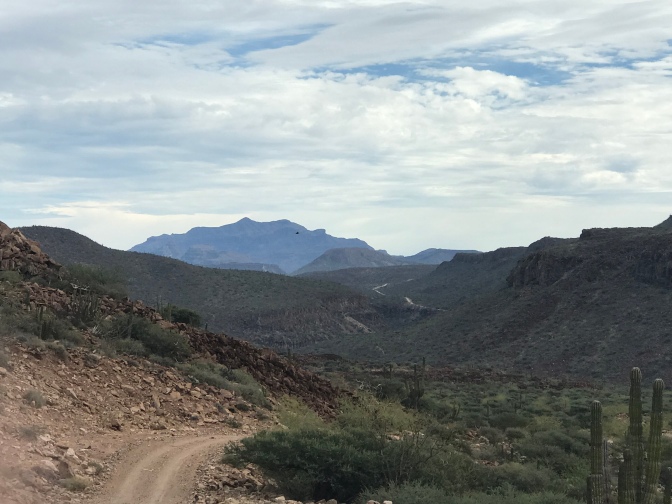 The climb out of the canyon was no fun. So rocky. Then a big bumpy downhill. After 10 miles I pulled over to eat some food. That’s when I saw that one of my water bottles was gone. Probably rattled off on the rocky downhill. Oh well, it’s high time I replaced it. I made a Nalgene full of Zuka to cheer myself up. Zuka is a powdered drink mix they sell by the packet in stores. It’s sweetened with aspartemine, which I understand is terrible. But it’s delicious and sometimes when I am riding, I just can’t stop thinking about the Zuka. The mango flavor is pretty good.

I pushed on. I had aspirations of making it to San Javier. It wasn’t that far, but so many hills! I rode through a reserve called El Horno. Which means “the Oven.” Then I saw the oven. It’s built of stones, like a castle, and it’s huge. What the hell do they bake in that oven? Is it for pottery or bricks? Gigantic bread?

My second Anker battery was dead. Only one more to keep me powered to Ciudad Constitucion. I was going to have to stop listening to podcasts. 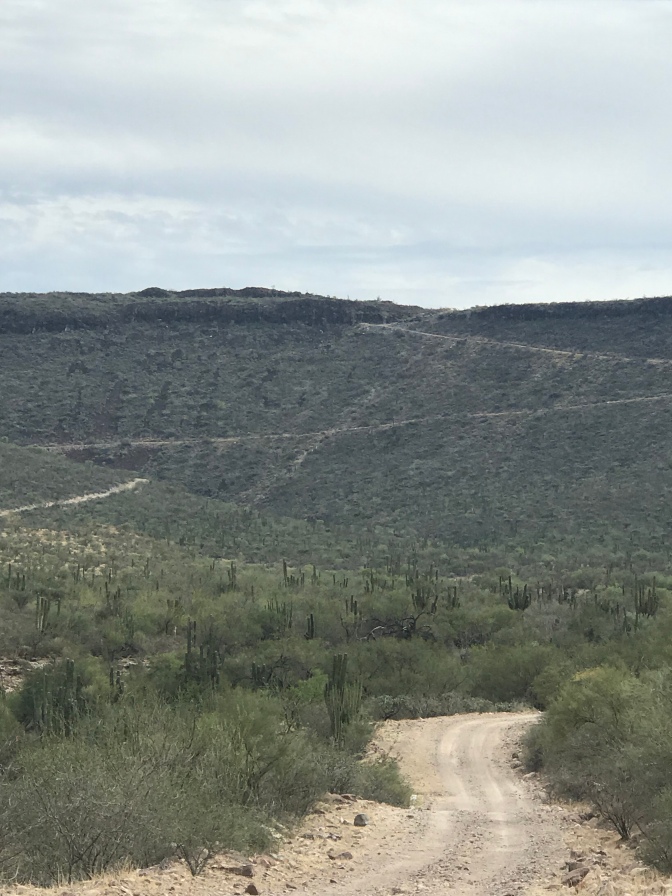 I came over another endless hill and the sight of the road ahead just about killed me. Long switchbacks stretching up yet another steep climb. I made it almost all the way up without pushing. That last stretch to the top, I was just too tired to keep the front wheel straight. Walking and pushing felt like more actual work, but at least I wouldn’t fall over.

There were kilometer markers on the side of the road, counting down to something. It was getting close to evening when I reached the zero and met up with a paved highway. East downhill to Loreto. I was tempted by memories of a laidback town with fantastic tide pools and water birds. But the route took me west. Traffic was light. The highway followed the course of a river, meaning water and shade.

I pulled into San Javier. It was bigger than I expected. I saw a sign for an albergue. In Spain, that means a hostel. Could it be the same here? I asked a guy on the street and he told me it was for students. But there were cabins down the street that I could rent. I rode towards the mission and saw the best sign ever.

The woman who rents out the cabanas was named Celia. I liked her. She showed me a picture on the wall of her five beauty queen nieces. I got the feeling she was a smart businesswoman. The cabanas weren’t that cheap. I would’ve paid any price. She handed me a plate of carne asada. Also she told me I could buy internet time at the store next door. That’s what the conectaless wifi signal was all about. Aha. 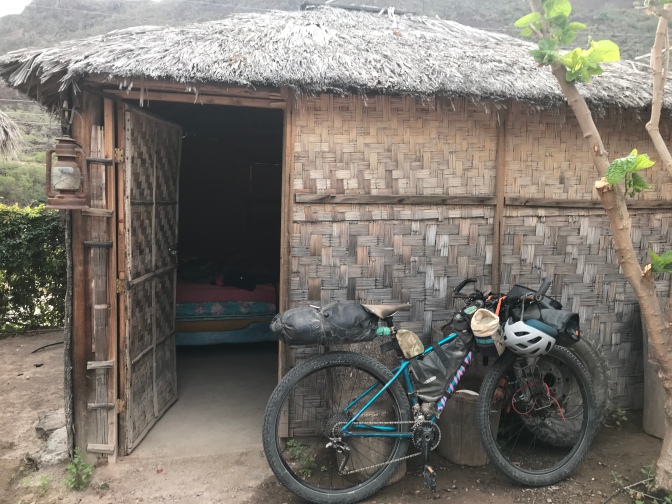 After a couple days of dragging myself over those bumpy hills, a real bed felt mighty fine.