Sort of a sandy night with all the wind. Every so often, a puff got under the fly and blew clouds of sand on top of me. Right at sunrise, the wind whipped itself into a crescendo that immediately died down when the sun appeared. 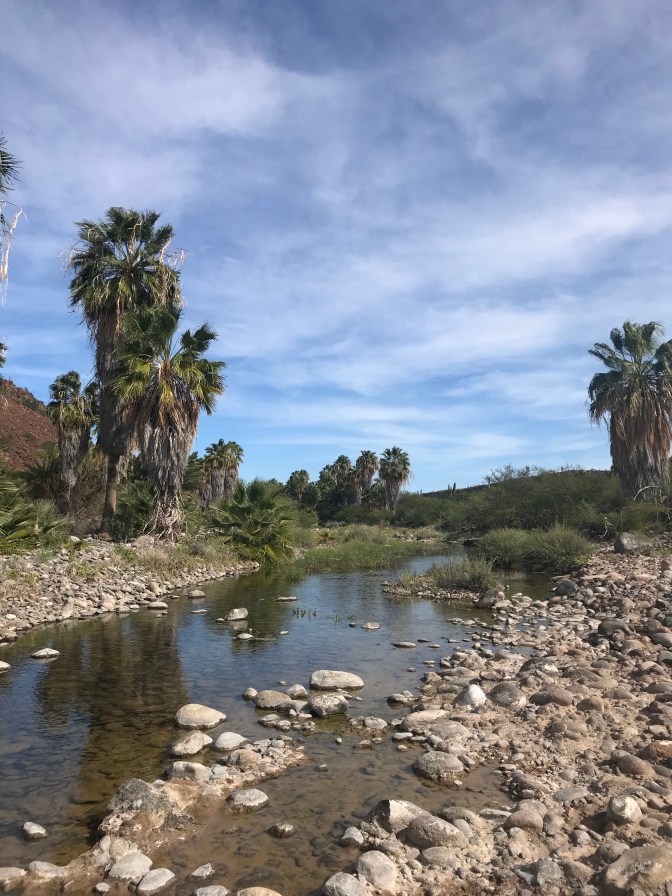 I was wrong the night before when I’d guessed that town was so close. I mean, it was only a few miles but what miles those turned out to be. Not just sand but bushwhacking. I pulled off the ‘road’ when it became just 6 inches of sand and tried to find firmer ground amongst the trees. Instead I found creeper vines full of thorns. It took a solid two hours to get through those few miles to San Ignacio. I knew I had arrived when I found the herd of horses in the trees. They all galloped away into the brush when they saw me. And heard me, by that point I was all sweaty and crazy and may have been shouting songs.

San Ignacio was a sleepy town. I pulled into a restaurant for some fish tacos. A man strolled by selling honey so I bought a small jar. Then I rolled around looking for a place to stay. I have this memory of coming to San Ignacio when I was a kid. We camped at a park that had about a hundred rabbits running around in a hut. My sister and I were in paradise. I found one place that sort of resembled my memories. It was maybe thirty years ago, so I could be wrong.

It took me a couple asks but I finally found La Casa del Cyclistas on the other side of the river. What a treasure. Located in a small neighborhood, it was a small camping space in a backyard. Othon, the creator, is a real bikey guy who obviously loves having dirty cyclists in his backyard. He had other bikes around for his son and friends to play with after school. Even a rugged tandem. Best of all, there were kitties! Friendly fluffy little things. I was in heaven.

For dinner I walked over to a taco stand for some quesotacos. On the way back I stopped at a store for my sugar fix. The guy behind the counter told me he was a cyclist too. He told me that there is a bike route follows the Pacific Coast all the way down to Chiapas. It’s called La Ruta Chichimeca. Probably I need to investigate this more.