Woke to clouds and wind, with a promise of gusty wind later. My water situation wasn’t great. Maybe I should backtrack and ride the highway. I debated myself as I packed then set off to the south. Stubbornness wins over fear.

Plenty of walking but not quite as much as I expected. I rode on one tiny bit of paved road. I came to ranch with a cool treehouse, where a man named Amador filled my water bottle. A while later I came to the first oasis. How amazing to see that water in the middle of the desert.

It was surrounded by date palms, and looked like the setting of a fairytale.

Later I came to an oversized spider. A tarantula at least as big as my hand. It held still for me to take pictures. If it had moved just a little, I would’ve been making a fast getaway.

I was still off and on the bike constantly, because of the sand. Once I fell and my ankle hit the chainring. Just a little bite, could’ve been worse. The wind was gusting around and my hair was constantly getting in my face and stuck to my smear of sunblock. Two cowboys rode their horses toward me. They were heading towards the last ranch, the one with the windmill. They seemed amused by my weird appearance. They said they’d spotted two more cyclists that morning, far off in the distance.

Around 4 pm I was still at least 10 miles away from San Ignacio. Exactly where I didn’t want to be. In front of me, a huge rocky mountain. Riding up was completely out of the question. I could barely push my bike up. And I mean push. It was ridiculous. The other side was equally intimidating going down. But there was a river down below, shimmering with moisture. Might as well camp there and save the town day for the next day. 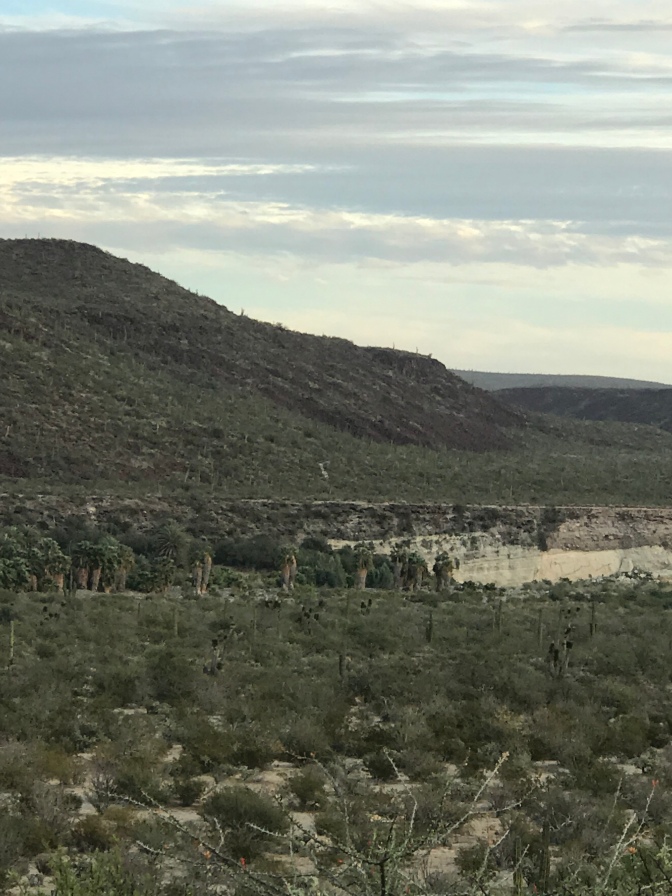 I found a nice sandy spot. The wind was really picking up. I found river rocks to keep all my tent stakes planted.