I left around 8 pm with another hiker who wanted company for his night hike. I told him that I walk slow on account of my shorty short legs. He told me, “Actually, I walk really slow for most guys. Proportionally, I have a long torso and short legs.” (Actually, he’s a foot taller than me, long torso or not. I totally win the slow contest.)

The trail across the open desert floor follows the California Aqueduct. It’s more complicated than that because there are two aqueducts. The old one is a great big pipe. The new one is open-topped. It looks like a big blue river, so lush in this land of dry sticks. Later the flow is sealed under cement. It looks like a road, with some concrete boxes on top. 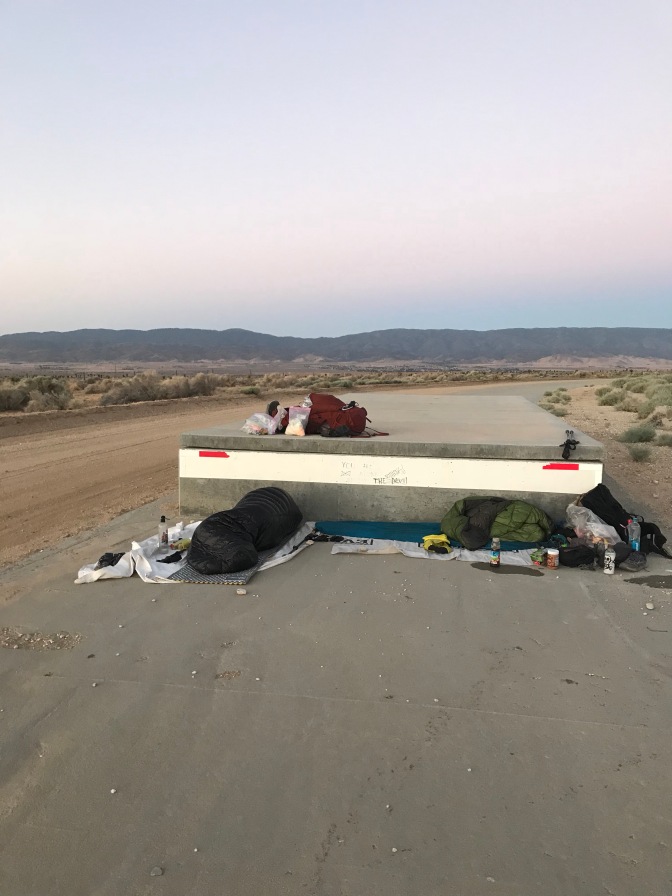 We ended up sleeping next to one of the concrete boxes. In the joints of the concrete, I could feel the residual heat of the day seeping out. The muffled sound of running water gave the impression of a nearby creek. “What’s that?” Asked my companion, swinging around at the slightest noise in the bush. He told me a couple of mountain lion stories and I realized why he’d been so eager for us to hike together. He wanted someone slower for bait.

I’d wanted to walk a lot further that evening but the energy drink only lasts so long. My eyeballs don’t work so well at night since I got old. Tomorrow’s route will be a long dry stretch.