It’s amazing how early I wake up now. Before the sun comes up, I’m awake and antsy, ready for the long night to be done. Outside my hotel room I could hear dozens of roosters, crowing their little dinosaur hearts out. I wonder if feathered dinosaurs crowed like chickens?

I wonder if there are any riders coming up behind me, laughing at my tracks sliding all over the road. 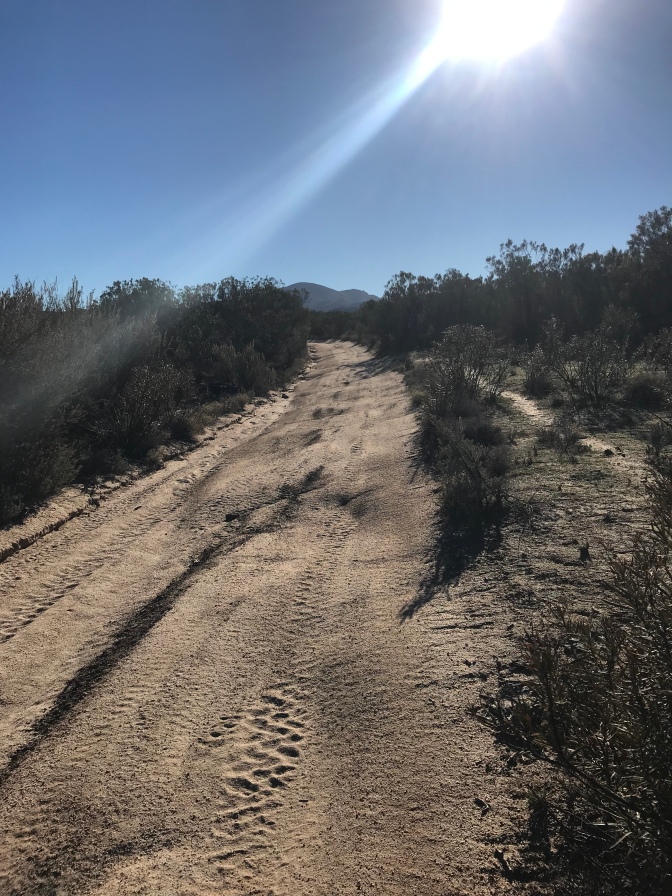 The guide described the upcoming road to Uruapan (and hot springs) as 46 miles and 4 to 6 hours. I don’t know what that is in Gretchen time. Pretty sure it will be more than 6 hours cuz that’s like twice as far as I usually get in one day.

I totally was on track to leave town early and then I saw this restaurant that looked like it had nice breakfast and I stopped. I’d already eaten breakfast but suddenly I needed more. As I was waiting for my huevos rancheros, a big crew of Baja 1000 guys walked in, decked out in robobike gear. I didn’t see any bikes when I left. Later four guys in a dune buggy type contraption passed by me. The road climbed up through scrubby desert all day. I saw maybe four little ranches, and lots of Baja 1000 signage. I could see the tracks of other cyclists, and footprints on the sections where probably we all ended up pushing. Some of the roads had gotten washed out from rain with big ruts carved out. Pushing that big bike up was kind of scary.

The whole time I was climbing up the hills, I was wondering when the sketchy downhill was going to start. If Lael and Nicholas thought the upcoming down was intense, I for sure was going to be walking and I didn’t want to do it at night. There wasn’t really a crest, just a little bump in the road, and then I was zooming downhill. And then walking.

I camped near some oak trees next to where a stream might sometimes flow. A line of pvc pipes ran along the creekbed, so water was flowing somewhere. It was another chilly night. I should try to stay up longer, sit outside and read. It’s foolishness that I think I should go to sleep at 7pm just because I’m cold.