Last night was so so cold. I don’t think leggings would have made much of a difference. It was the shortest day of the year. I could ride much farther if I had more daylight. Pleased with my camp hiding skills. I was right next to the road but no one saw me. Almost a full moon last night. I heard coyotes last night, bunches of them yipping in the night.

Very first thing, I climbed up a huge sandy hill. It was awful, like a full hour of climbing, and I could feel all my bike muscles lighting up like an anatomy chart. At the turn at the top of the climb, I could see the tree back where I’d camped. 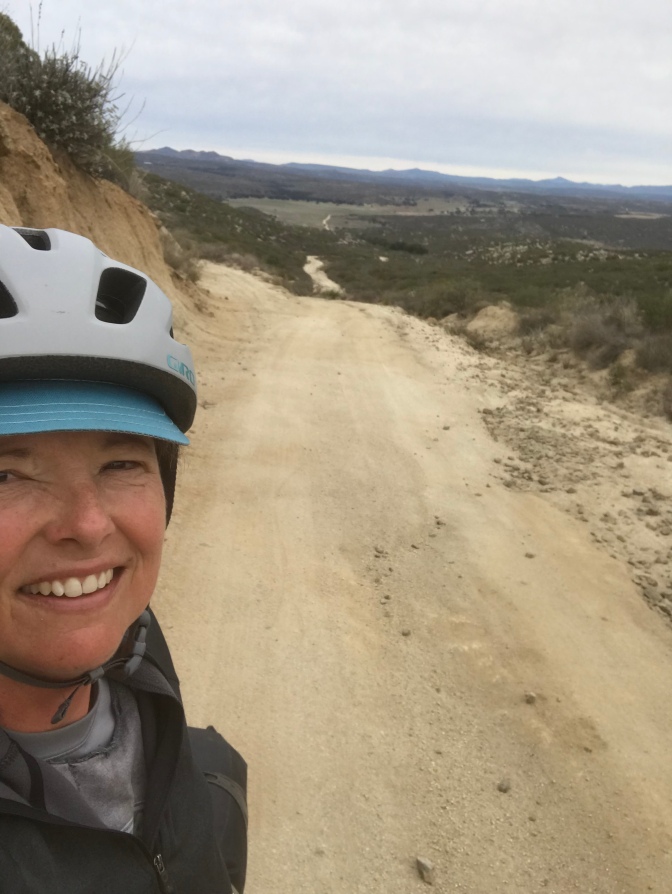 I stopped at a rancho with a Se Vende Queso sign. The lady said those two girls were a day ahead of me. (Good luck catching up because my ass hurts and I’m slow.) I could see their tire tracks and sometimes footprints. I’m not the only one getting bogged down in the sand. Oh the sand.

My Garmin wouldn’t recharge off the Anker batteries. Too bad I didn’t learn that earlier, but the Ride with GPS program on my phone works just fine, even without cell service. Just like the Guthooks app I used on PCT, the gps eye in the sky always works. I would bitch about technology making things too easy, except that it’s still not easy, and I have put in my years getting lost with paper maps in foreign countries.

The cheese was really good. I saw the cows. They looked clean and healthy. Normal looking udders, not the painful beach balls of American dairy cows. I have all this camp food leftover from PCT but I just want to eat this yummy cheese and the nice tortillas I bought in Tecate.

I asked the ranch lady for water too, and she hesitated till I showed her the water bottle. So I didn’t want to ask for too much, and I hope she charged me extra. We talked a little. My conversation skills were so rusty, I had so many moments of disconnect when I was trying to think of the word that I totally used to know. We agreed that last night had been especially cold, and she gave me that look of you’re a little crazy, I think. I had to agree.

All day was dirt roads. Mostly flat, not too rutted out. Sometimes lots of sand, and plenty of hills. Not the kind of riding I’m used to. Like, I can’t space out and go on automatic. A couple times I skidded out. Mostly I did the slow motion fall and step off, but once I figured out how to ride through and not fall. Maybe I’m getting better. Wish I could go faster. It’s a little scary on the downhill, when I can’t tell if the sand is about to get suddenly deep.

Every once in a while I passed a ranch. Sometimes the dogs came charging out to kill me and I just sped by as fast as I could pedal. Sometimes the dogs were curious but too busy with their ranch work to bother with me. Once I passed a herd of recently sheared sheep and two nice looking cattle dogs. I would love to see those dogs working the herd.

Probably I saw about 8 different cars go by. A couple jeeps and some beat up pickups carrying loads of alfalfa and sheet rock. Everyone waves.

I rode by plenty of dry stream beds and drying puddles. I had about two liters of water and that was enough for the night, but not really for tomorrow. Just when sunset colors started appearing over the desert, I came to a dip in the road and a rushing stream and a campground. A deserted campground. Which sounds like the setting of a horror movie, I realize. But really it was perfect, there were some picnic tables and bbq pits and half-built cabins. I pulled in under some oak trees, next to the creek. I was really happy to see that water after low-key worrying about it for hours. 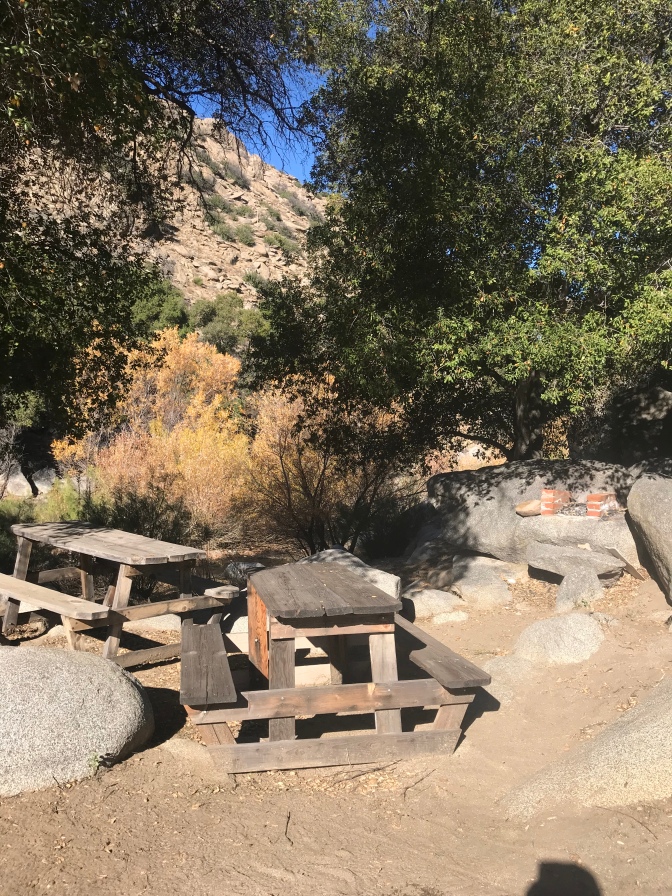