Toronto is like a Pacific Coast city plunked down in the midst of Canada. Mostly it reminds me of San Francisco, with its tourist-clogged waterfront and emphatically multi-cultural neighborhoods. Seattle, with the fake Space Needle/ Light Saber thingie and industrial outskirts. Berkeley for the blocks-long grunge art street scene on Kensington Market.

My couchsurfing host had a tiny apartment crowded with books, old furniture, and her sedate shih tzu. For dinner we ordered sushi burritos from a new Hawaiian place, delivered magically by UberEATS. In one of her books, The Hipster Handbook I found out that my hairy armpits and shaved legs thing is an actual hipster chick style and not something that I alone invented. 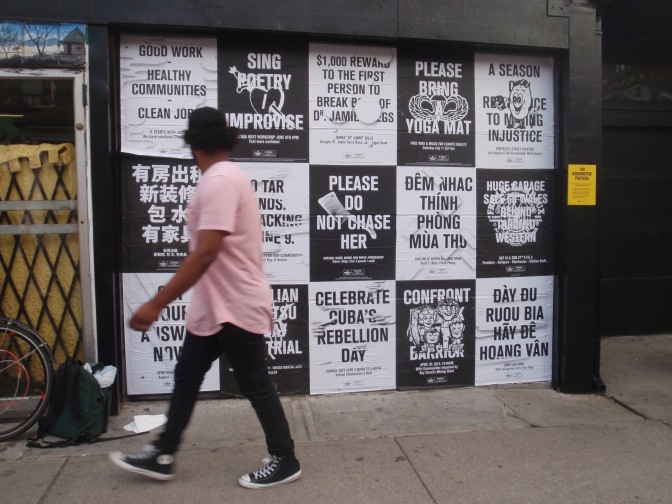 Underneath its metropolitan, skyscraper-filled  downtown, Toronto is crisscrossed with greenways. In the morning, I took my first run since Minnesota, an hour down the Kay Gardner Beltline. The path is mostly protected from street traffic, dipping under the roads from park to park. Everyone in Toronto was out in the sun, determined to soak up every last drop of summer. Even on a hot morning, I overheard two conversations about winter boots. Because winter is coming.

The unfamiliar exercise had me “resting” on the couch most of the day. My host may not have believed that I was fit enough to have cycled so far.

From Jack Layton Terminal you can take a ferry to Toronto Island. Roundtrip tickets are $7.50 with a bicycle. I took the smallest boat to Hanlen’s Point as the two other ferries seemed way too popular. It was a little drive-on ferryboat with plenty of room to take photos of the skyline. Toronto Island itself is mostly a big park. There are a couple of marinas and clubs for the yachties, miles of picnic-y lawns and funny lake beaches. I had a WarmShowers connection for someone who lived on a boat, although in his emails he sounded busy with boat racing and parties that day. The island was hopping with multiple wedding DJs. The ferries keep running well after dark, but there aren’t many cars on the island. I found a nice bench on the shore facing Toronto and tried taking pictures of the fake Space Needle doing a fancy light-up show.

Since it was such a nice night out, I decided to wild camp instead of waiting for the boat guy. I rolled around the dark island like a raccoon until I found a nice clump of bushes near the beach.

In the morning I made breakfast at a picnic table next to some fancy rich people boats and then caught a ferry back into the city.

For my last night in Toronto, I turned to Air B&B and rented a night in a vintage 70s VW Bus. Actually my first time and a bit of an experiment. There are plenty of random beds and rooms for rent on Air B&B, but that’s boring. Some mansions and playrooms that look fun but pricey. (I’m still looking for my dream treehouse.) The washroom situation for the VW wasn’t the best. If you’re not into drinking out of a hose or peeing in an alley, this might not be your thing. But if you like funky places to stay, this one qualifies.

On the last Sunday of the month, the streets at Kensington Market are closed to automobile traffic and the freaks come out. It’s close to Chinatown, and Toronto really does have a proper Chinatown.

Back in the nineties I was known to occasionally stroll down Telegraph Avenue in Berkeley. Different decade but not so different scene. The sun was up and the tattoos were out. Pictures of food were popular. I saw a couple of cupcakes and an artichoke etched into skin.

Pot is seconds away from being legal in Canada so some heady pot-repreneurs are already in the game. From what I hear, you can go in and consult with a doctor via Skype and get a quick medical prescription. But these places still get raided and shut down, cuz, haha, it’s illegal!

I saw a cafe selling Turmeric Lattes. Part of me wanted one, but another part said, No, that sounds horrible.