There are few things quite as indulgent as eating an entire cherry pie with a spoon – “Well, I can’t keep carrying this around now, can I?” I never realized there were so many Amish and Mennonite communities and they’ve all got farm stands selling incredible pies and jams and homegrown kohlrabi.  Then I’ll tell someone – “Oh, I went by some Amish farms.” And find out I got it wrong, they were Mennonites, and there are different branches, some don’t really speak English, some don’t use electricity at all. I love passing the farms with work horses, black buggies, be-bonneted barefoot children, interesting accents.  The horses are lovely, big intelligent-looking animals that perk up at the bicycle, run towards the fence to investigate this strange creature passing by. 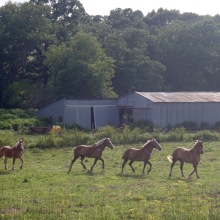 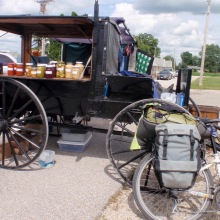 I guess it’s Minnesota where I started seeing the ATV trails. Zelda, my possessed Garmin, is always steering me to them. At first I resisted. The trails were too muddy, too rough. The first time I rode one for more than a mile I got mudded up, ended up pushing through bogs. Then I camped on the side of a trail, just outside of town, rather than camping in the town park next to the grain silo with its lights and fans all night long. It was quiet and wooded and blinking with fireflies.  Later the trails got smoother, more bike friendly. Some even had bike repair stations with tire pumps and tools and restrooms. One magnificent night, close to the full moon, I rolled along the Gandy Dancer Trail for miles in the moonlight, passing an airport and forests, watching the fireflies.

I pulled over at some fairgrounds and slept in a baseball dugout. The next morning I found wifi at a laundromat and then followed the trail north, only to have it regress into a rutted ATV trail, lonely in the bogs and forest. A bear trundled across the path ahead of me.

I barely saw any humans that day and around 8:30 I finally happened upon a shelter cabin. It looked like rain so I set up my tent on the dirt floor inside the cabin. I’d run out of water and the only water I could find looked stagnant. I pumped it through my filter twice and boiled it. It was still orange so I made mac and cheese. (I didn’t get sick so I guess it was okay.) The cabin ceiling hummed with mosquitoes and I saw a rat dancing in the rafters. But my fear of the unknown boogey man in the dark has finally receded. I slept just fine. The next morning I continued down the trail. At an old cemetery I found an old-fashioned water pump and refilled my water bag. Zelda led me down a road with a road closed sign, which I ignored. Turns out, it really was closed at the bridge.

The recent flooding had sent a huge snarl of uprooted trees down the Mississippi to slam against the pilings. One of the road workers helped me drag my bike through the mess. My bags and I got thoroughly coated with mud in the process. After that I rerouted when I came to Road Closed signs. They don’t always mean that there’s no way for a bicycle to sneak around the edges.

Later that evening I rode into Duluth, very charming city. The shower at Spirit Mountain campground felt magnificent after two buggy nights in the rough. I rolled into a bike shop to buy a new inner tube, just in case. The fellows there were duly impressed with my trip, happily handed me a cool sticker and de-spidered my bicycle.

Those daily webs on the handlebars should have been a clue. Following the tourist route, I checked out the waterfront, watched the drawbridge go up for a tall boat, took the bike trail north out of town. A quick stop for lemonade with a young entrepreneur. That’s one of the rules of bike touring – must stop at all lemonade stands.

Duluth is a very livable city, at least in the summertime. It was a busy weekend and lots of no camping signs and a forecast for thunderstorms. I found one cool campground but the host was nowhere to be found, didn’t answer his phone. A few miles north I found an RV park and the host gave me a nice discount. When the thunderstorms hit around 3am she came out with a flashlight and suggested I come in her house for awhile. I got soaked in the process but after my near-tornado experience I wasn’t going to refuse shelter. When the worst of it seemed over, she handed me a plush green pull-over to keep me warm the rest of the drizzly night.

Summer weekends on Lake Superior are plenty crowded. I skipped a few sections of highway by riding the Gitchi Gami trail. What an amazing ride on a pretty day. It’s not completed yet, but already plenty of runners and cyclists are using it. More than a few bike tourists who saw my load and stopped me to ask about my trip. Two Harbors to Duluth is the route for Grandma’s Marathon. My friend ran it earlier this summer, said it was overwhelmingly hot that day.

The scenery does remind me of Big Sur, with less waves. And likely more affordable. You don’t have to be Zuckerberg to have a house on these shores.

The biting flies and mosquitoes also enjoy a nice day at the beach. One fly hooked onto my ankle and clung there even after I walked into the lake. At Two Harbors, I stayed at the RV park and spent an hour standing in the lake till my legs went completely numb. It’s not warm water at all.

The campground host gave me a ticket to the All-You-Can-Eat Waffle Breakfast. I made a real pig of myself that morning. Barely ate for the rest of the day.

Grand Marais is another town where I think I could live. There’s a fantastic seaside view, a good local art scene, and an awesome food co-op.

8 thoughts on “Riding to Lake Superior”