At first, it was just more foul sleety weather. As tiny hail balls ping ponged off my face, I wondered if I would end up hiding in another hotel room. I don’t have the gear, or the fortitude, for this constant crap weather.

Then I saw the wild horses. Okay, maybe not wild, but they live at the Wild Horse Sanctuary.

In Lost Hills, the hills are not actually lost. It felt kind of wonderful to climb hills again. I hadn’t realized how much I’d missed variations in geography.

The real South Dakota magic started at Wind Caves National Park. That’s where I started seeing buffalo wandering across the highway. Herds of deer with wagging fluffy tails like huge feather dusters attached to windshield wipers. Adorably pissed off prairie dogs barking and scurrying. I woke up one morning to find my tent surrounded by nibbling bunnies and deer, straight out of Disney. Two other campers, a mother and daughter from California, found strange marks all over their minivan. It took us awhile to figure out that the marks must have been made by deer, nosing the sides of the car, maybe licking for salt.

I thought about taking the cave tour, but who wants to spend a beautiful day inside a cave? Instead I rode up towards Custer National Park. Buffalo ambled bigly into my path. I know I’m not supposed to put a baby on a buffalo, but is it okay to ride past them on a bicycle? I guess I know an angry animal from one that doesn’t care. But you try cycling by a buffalo with a head the size of a couch and see how confident you are in your animal mind reading skills.

“You look so young. I feel like I should card you,” said the waitress at Black Hills Burgers and Beer.

Way to romance me, South Dakota.

It takes a lot of climbing to reach the Crazy Horse Monument. Cyclists get a reduced entry rate, and, as usual, the best front row parking. I spent an hour wandering around the surprisingly well-curated museum of Native American artifacts. For some random reason, the museum was hosting a conference for American Attorneys General. Instead of the usual RV and biker tourist crowd, I was surrounded by a lot of men in suits. And a few women. 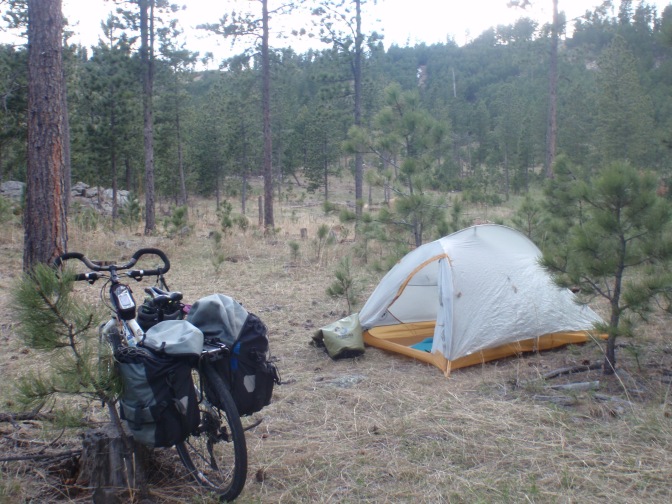 There is nothing quite like the joy of a perfect free camp site. I followed a logging road off the highway and then pushed my bike up a hill. Protected from the wind and out of earshot from the highway, I sat up late watching shooting stars. And only slightly straining my ears for any hungry mountain lions or ax murderers prowling around. The only animal visitor I had was a Tom Turkey who stopped by in the morning to gobble at me and fluff his tail indignantly.

After Crazy Horse, Mt. Rushmore isn’t terribly impressive, except for the gorgeous ride up to the park. When I saw that parking would cost $11, I decided to stash my bike in a bush and walk in for free. I did buy a sticker to put on my bike. While the cashiers were trying to figure out how to ring up my $2 purchase (a huge ordeal requiring no less than 6 people to solve) I asked about the animal I’d seen on the road. Bigger than a squirrel and fluffy. Turns out, it was a marmot.

I always investigate the displays of brochures for local tourist attractions. This is how I found out about the George Mickelson Trail. It’s a Rails to Trails multi-use path, wide and smooth and finally free of snow. After looking at the map for a minute, I made the executive decision to change my course and follow the trail to Deadwood. This is one of my favorite things about independent travel. No meetings, no negotiations, no compromises, just me and what I want to do. It was a glorious ride. 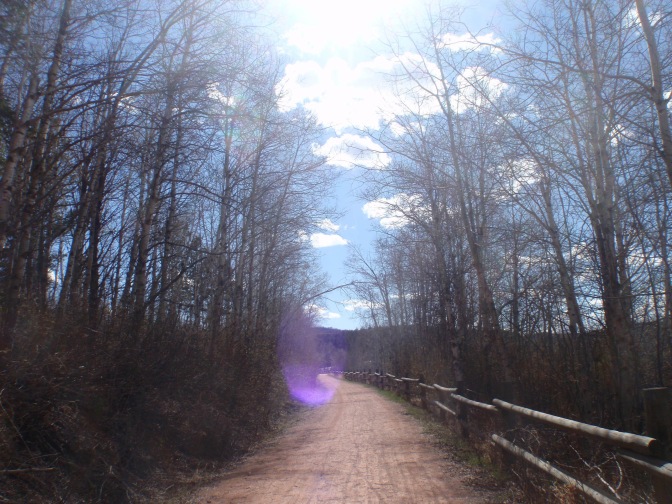 On the second morning, I was drinking coffee at Dumont Trailhead when cars carrying a class of fifth graders from Harding County pulled up. Their teacher, Wanda Lyons, organizes a bicycle field trip every year. Having an audience of students immediately put me back in teacher mode. The kids were only too happy to gather around my bike and ask a ton of questions.

“How many times have you fallen down?”

“How much does the bike weigh?”

“How far to you ride every day?”

“Where do you sleep at night?”

I am never one to turn down a good teachable moment. One of the boys was wearing a tee-shirt that said something about Hugh Glass. I commented on it and our discussion turned to the events portrayed in The Revenant. Talking about a man who crawled 200 miles with maggot-infested grizzly bear wounds in his back, IMHO, is a fantastic way to get kids interested in American History. Why study the boring parts when there are such awesome non-boring stories? For a few minutes, I considered being a teacher again. But then I realized that these 11 kids weren’t the whole class. There are probably 30 more that didn’t come on the field trip. I wouldn’t even be able to remember all their names. And I bet there would be parental objections to teaching how Sioux Indians treated Glass’s maggoty back with hot buffalo urine.

Deadwood used to be a mining town. Now it’s full of Ye Olde Shoppes, slot machine casinos, and old people on bus tours. During lunch, I eavesdropped on the next table. They agreed that they were all tuckered out from their exhausting bus tour.

“Those Indians, they never invented anything, did they?” yelped one witherey lady.

You mean, besides Democracy? I thought about yelling at her, but didn’t.

Outside of Sturgis, I camped at a sublime little pond full of hypnotic bird life. The next day, I rode to stay with a Couchsurfing host in Rapid City. Rather than taking the Interstate, I ended up on a long ride through the hills, through a tiny town called Nemo where I bought a jar of yummy pickled vegetables. It rained for approximately one minute, which stirred up just enough mud to make me absolutely filthy.

I still have a few hundred miles of South Dakota prairie land to ride across. I have a strong feeling that it will not be what I expected.

3 thoughts on “South Dakota – Way Better Than I Expected”