I filled my water bag at the soda fountain without getting too much on the floor and bought a paper map. It verified what my Garmin had been trying to beep at me all afternoon. To reach the Grand Canyon, I needed to be 30 miles east and the old Route 66 no longer covered that stretch of mountains.

“Is there a backroad or do I need to take the Interstate?” I asked the man behind the counter.

“I don’t know. Hey, Glen? Is there a backroad to Williams?” He motioned to an older man stocking shelves. On his hip, he wore a large holstered pistol. Glen with the gun was eager to give me route advice.

“There’s a good dirt road. It’s got less elevation change than the Interstate. Probably easier on the bicycle.” I managed to not stare at the gun and thanked him. Maybe they’d had a lot of stagecoach robberies lately.

After a mile on the dirt road through Kaibab National Forest land, I pulled behind some trees to find a camp spot. There were coyotes howling in the dark. The night before I’d camped off another dirt road. I’m finally getting over my fear of camping alone in the semi-wilderness. I almost don’t even think about monsters and killers when it gets dark. A bottle of wine and a functioning cell phone go a long way to dispelling the demons.

The next morning I struck out on my “good” dirt road. After a few miles it became a very bad dirt road. My Garmin was almost useless. Follow the dirt road, it said, and then I wandered up a creek bed. Turn right on dirt road, it said and I found myself in a mining area. Even though it was obvious that this dirt road was not going to work out, I still had to bumble around in the sand and gravel for another hour before admitting defeat. I hate turning around.

I have been known to keep pushing my bike through roadless snakey jungle rather than turn around. It was well after two pm when I got back to Ashfork. I ate a cheeseburger and fries at the local diner. I did not go back to the convenience store to tell Mr. Open Carry that his advice sucked and that even a 4X4 might not make it on his “good” dirt road.

Turns out, the I40 isn’t bad at all. The shoulders are huge, with rumble strips to keep the trucks at bay. There were patches of actual snow snuggled in the shadows. There was a nip in the air. On one long climb, I spotted a cyclist stopped at the side of the road. I rolled up to him and met Florent, from France. He runs a free educational website to help students learn math. Through ads, he makes enough income to support his Round the World bike tour for three years now. He’d just come back from winter break back home and had picked up a cough on the ride from Las Vegas.

At Williams, Florent and I messed around town looking for a campground with warm showers. None of the RV parks had tent camping open yet, due to it still being winter. We rode further down the highway to a KOA that turned out to be closed. Since it was already dark, we pulled into a stand of trees off the side of the road. It seemed like a good place to camp… until the trains started rolling through. Turns out that’s a pretty active line. Active, as in more than 30 very loud trains went by that night. Nice campsite, Gretchen.

I was impressed with Florent’s work ethic. Inside his humungous tent, he has a table set up for his laptop and he works every single morning on his website. We pulled out of our train yard and headed north towards the GC, with a little help from a chilly tailwind. Just outside the park, we took a campsite at the RV park. The wind was ridiculous by that point. I hunkered down in my tent with some rum and waited too late to take a shower. By the time I paid my $2 in quarters, there was only 1 minute of hot water left. As soon as I was lathered up, my shower turned miserably cold. I rinsed off in parts and wrapped my wet hair up in a fleece hat. It froze that night. My hair dried sticking straight up, making weird devil horn cowlicks. I decided to be done with camp showers.

In the morning, one of my camp neighbors came over to ask about my bicycle trip. He was from Tibet, a refugee living in SLC. He gave me four boxes of Annie’s Organics Mac & Cheese. I love it when people give me food.

Plenty of traffic on the road to the Park gates. As everyone keeps reminding me, it’s Spring Break! Cuz nothing says Spring Break like the Grand Canyon! The campgrounds were all full. The ranger showed me a few places on the map where we could go outside the park and camp in the Kaibab. We rolled around the Canyon Rim Road for a few hours. Florent is a much more dedicated picture taker than I am. After a few snaps, it all starts looking like rocks to me. But I do like checking out other tourists. People come from around the world to look at this big hole in the ground. 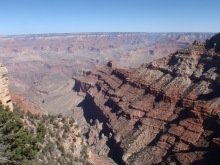 Around 5 pm, not really sure what to do with ourselves, I suggested that we just go roll through the campground and see if anyone wanted to share their space with two cyclists. Remember the part in the first Terminator movie, where they show the perspective of the killer android, how he scans through all his visual and auditory input? That was me, except less murder-y. How about them? No, look at all those toys, they have a bunch of kids. How about them? No, too old. They wouldn’t trust us. How about them? License plates from Texas, big dogs. Probably not. My internal dialogue was a little jerky and prejudiced, but I was on a mission. Finally I saw a likely candidate and pulled in before I could lose my nerve. “Hello? Sorry, I have a question to ask and it’s okay to say no… Are you alone? Would you mind sharing your campsite?”

“We don’t have cars, just bikes. Where are you from?

“Oh, my friend is from France! I can share my wine with you and we’ll give you ten dollars..”

“Wine? Oh, sure!” This is how we met Pedro, a graduate student studying at Tucson for the semester. He’d rented a car for Spring Break to drive around Las Vegas and the Grand Canyon. We ended up staying for two nights and Pedro was great company. And happy for the company, I think. He wouldn’t let us give him any money but never said no to wine at night and coffee in the morning.

If you’re ever at the Grand Canyon looking for wifi, I can tell you two good places. The laundry/shower building at the campground and the library near the market. The library is really interesting, full of GC locals. I would love to know more about the people who live and work there. There must be a school. Is it a company town? Are there cliques? What’s the worst job there? My guess would be bus driver, but that’s just me. Maybe people who become bus drivers enjoy getting asked the same dumb questions over and over and dealing with entitled tourists all day long.

We left via the Desert View exit and camped on public land the next night. It was more than 1000 feet lower in elevation so it’s good we found someplace to camp in the park. The next morning Florent and I parted ways at a convenience store. He was headed south to Flagstaff and I headed north through Navajo Nation. I hope I get more chances to travel with fellow cycle tourists along the way. It was a real treat to compare trips and gear and remember that I’m not the only weirdo on a bicycle out here.

5 thoughts on “Riding with Florent”