My hotel was expensive but still funky. There was a huge tv that only got one channel. Which exclusively screened Tom Cruise movies that I’ve never heard of. Dude has been in a lot of movies.

I rode back to Colonet for supplies. And another try at denatured alcohol, since my first experimental bottle failed to catch fire. It was a sketchy ride back to town, making me grateful that I wasn’t riding on the highway fulltime.

I bought some cheese and bakery goods, probably not enough. I was still nervous about riding into mud filled roads. I’d sent messages to the people I knew were ahead of me, asking about the state of the dirt. It’d been dry skies for three days. Was that enough to dry out the roads? Be brave, just go for it.

I got to the turn-off on the highway. There was a mare and foal grazing at the intersection. I took that as a good sign. I rolled on over gravel and sand, ruts and rocks. There was one last pueblito. Two sisters walking along the dirt road waved at me. The primary school was one plain building and two mobiles. There was a telesecundaria up the road. 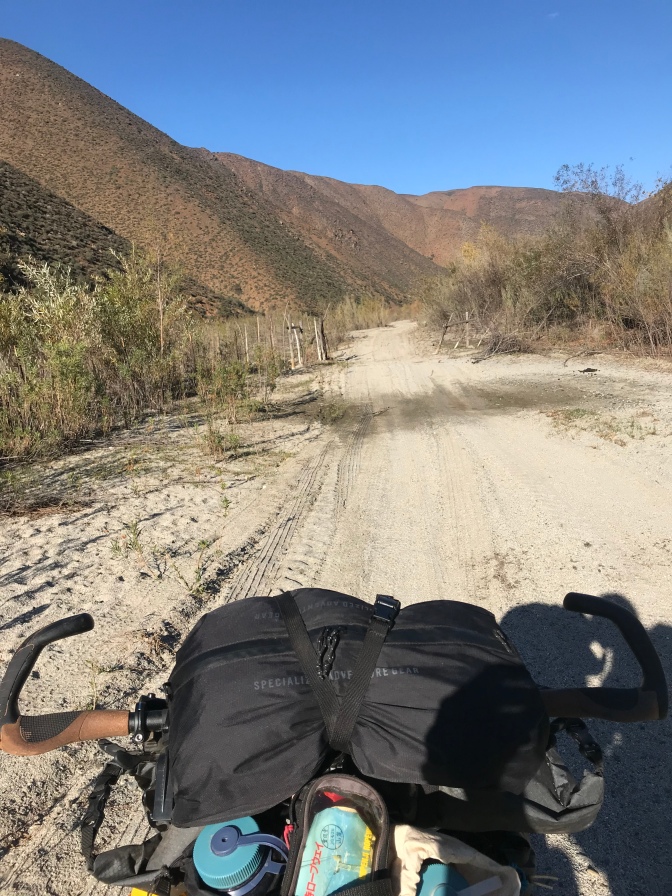 Beyond the town, it was hills surrounding agricultural fields. Around quitting time the trucks carrying workers home started passing me. There were a few gates to open and close along the road. The complicated barbed wire sort that unhook with an alarming bounce. To rehook, I had to yank on the barbed wires and sticks to get the hook to reach the post. Yet another thing that would be so much easier with two people.

I came to a little ranch, a simple adobe structure and one baby horse grazing by a stream. There didn’t appear to be anyone around. I was tempted to camp, just to hang out with the baby horse. But no! Not while there’s still daylight!

There was a low section with lots of water. Big puddles stretched across the road. Mostly I could scoot around on the side, avoid the mud and dark water. I ended up pushing through bushes on one part and got my shoes all muddy. Then I rode straight through a big puddle. It went up to my shoes. My socks got wet. Dammit, why did I do that?

The hills were getting gnarly and mostly I stopped trying to ride uphill. I walked and pushed. Some downhills too. I was getting worn out and my camping choices were sparse. I decided to make an exception to my usual practice of being super hidden from the road. With all the crazy rutted out roads I’d traveled, there wasn’t going to be any night traffic. I found a sandy spot at a turnout. It was plenty windy so I did my best to stake out the tent. I had to get up twice to redo my stakes. Even so, the tent walls blew down on me a couple times in the night. I guess if I hadn’t lived through many a night in this tent in similar conditions, I might have been worried. But I wasn’t cold or wet, and my tent would be okay. At least the wind will dry my shoes.