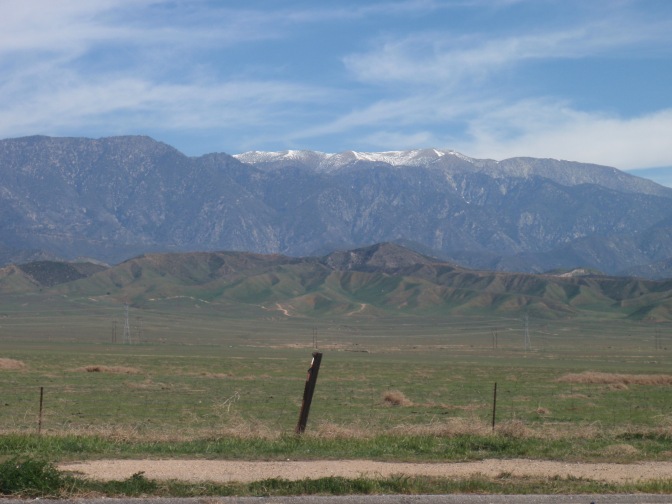 Banning is a nice little town between Los Angeles sprawl and the desert. Pretty close to where San Bernardino County ends and Riverside County starts, which is some kind of turning point in landscape and population and all kinds of other things. For instance, the drought. Isn’t that funny, the drought ends where the desert begins. The whole restricted watering, brown is the new green, let your lawn die thing doesn’t seem to be in effect anymore. People water their green green lawns with old-style sprinklers that shoot half the water directly into the air to be evaporated before it hits the ground.

Here’s another thing about Banning: it’s really hard to leave. Not because it feels so homey and welcoming. Because there is no bike route. Okay, there’s a route but it’s secret. Not on any map and certainly not on my GPS. Zelda directed me to a road that lead directly to the gates of the Morongo Tribe Sovereign Nation, private property, entry with written permission only. The guard gave me some vague directions about a dirt road on the other side of the freeway. Turns out that means between the railroad tracks and the freeway. This took me awhile to figure out because the “road” was actually a washed-out dirt trail where hobos camp out. In some parts it was so sandy that I couldn’t even ride. I pushed through the sand drifts until the pavement started up again by a billboard for McDonalds Filet-o-Fish.

After that, my GPS directed me to criss-cross the freeway past the Morongo Casinos. Which, by the way, will soon be featuring fine musical acts like the B-52s, Julio Iglesias, and Nelly. This was all fine until I got the part where I had to turn onto the Pacific Crest Trail. The actual trail itself, which is all sand in these parts. My bike wheels sunk down in the drifts and the pedals crashed bloodily into my ankles. Two and a half miles of sand, heat, and wind. Awesome.

By the time I got back on the pavement, I was done listening to my GPS. I was done leaving the road, no matter what Zelda beeped at me. I had a nice tailwind to push me by the acres of huge spacey windmills. At the Palm Springs Visitors Center, I was sure my troubles were over. What a heartbreak when the nice man behind the counter started giving me directions.. “First you need to get on the I-10…”

“Oh yes, you can. It’s just one exit,” he said. And I didn’t want to bite his head off so I just took his handouts and advice and walked out. Maybe I was wrong? Oh no, actually, still no bicycles on the freeway, duh. It was already after 2pm and I had to use my GPS again. Which led me, once again, to a dirt road. At least this one was firm enough to ride on. One good thing about the desert is that there aren’t many people around to hear you throwing a fit.

The sun was setting when I pulled into Indio after another twenty miles of tight shoulder riding. I stopped at an AM/PM for water and put on my lights, telling myself, “It’s not late, just dark.” As I rode passed luxury gated community after golf course, I felt water all around me. Fountains tinkled in the dark, sprinklers exuded cool mists, and the aromas of tropical flowers wafted in the hot night. How do all those people in LA with brown lawns feel about this blooming in the desert? Could I guerrilla camp in the landscaping if this park doesn’t work out? All I really need is a toilet and a faucet. I’m carrying a water purifier; maybe I could pump water out of a fountain.

I have never been so relieved to see a line of RVs.

And once I pulled in, everything was okay. I had 9 minutes of exquisite delight in the coin-op shower. My next-door neighbor gave me a chilly Coors Light. I made pad thai with Raman, a peanut butter pack, and red pepper flakes.

Today I’m taking a day off, washing my clothes and recharging my batteries. An old man in the laundromat (Palm Desert native) says their water comes from an underground aquifer and the people in LA are “too lazy to pump it.” Also, gangs. Gangs caused the drought. Or something.

I’m beginning to realize that this GPS can only be part of my direction-finding strategy. I need paper maps and more research time. Call me old-fashioned, but I’ve always loved the paper map. And they keep working even when the satellites crash. Which could totally happen.