A few days ago, I came pretty close to crashing my bike. Considering how fast and heavy I was at the moment, I could’ve easily smeared myself all over the side of the road. 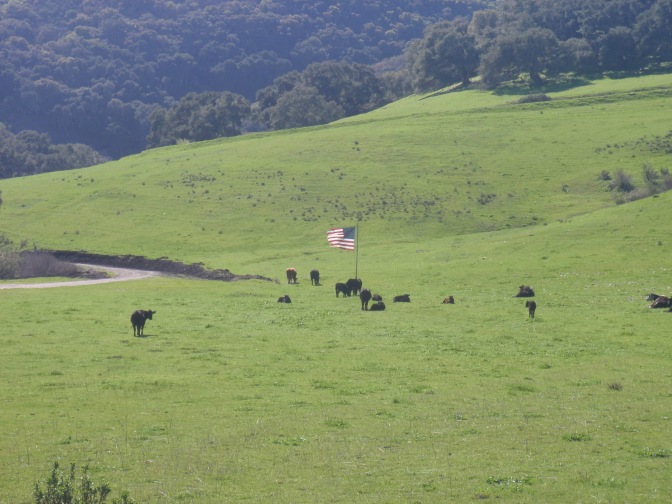 It was a gorgeous February day and I was riding Highway 1 from Lompoc to Gaviota State Beach. The scenery was rolling green cow pastures and oaky hills. As I ride, I like to listen to podcasts and that day I was giving Marc Maron’s interview of President Obama another listen. I can still hear the RVs and semi-trucks rumbling by, because listening to two people talking in no way drowns out traffic noise.

As it nears the coast, Highway 1 meets 101 at Gaviota Pass and the highway drops down to the coast. There is one particular bend in the road where the wind likes to gust so much that it even gets a warning sign. I’ve no idea how fast I was going, fast enough to not risk a glance at my bike computer. I hit that curve and the wind hit me. I got the speed wobbles.

At the same time, a large white trailer a few feet to my left started wobbling too. As I struggled to keep my front wheel going forward, the trailer drifted towards me. There was nothing I could do but hold on and keep going.

I wonder if there were any drivers behind me, waiting for the lopsided collision of my small self and a tractor trailer.

Somehow I kept it upright. The truck zoomed by. It probably lasted a second, my moment of near-death. I coasted into a rest stop and dismounted on legs that wiggled like licorice whips.

At the rest stop there were three grungy kids, panhandling for food and gas money. They had a cat on leash. When I saw that cat, I wanted to grab it and bury my face in her belly fur. I didn’t, because cats don’t like that sort of thing from strangers. But she did allow me to pet her and nuzzled her face on my finger. Her name was Mocha.

After I’d recovered myself, I gave the kids $5 for their travel funds. I don’t think they’d been having much luck because they seemed genuinely pleased. As I pulled out of the parking lot, I saw their car, a tiny hatchback barely big enough for the cat, much less three humans. The back window was full of camping gear and a huge bag of Meow Mix. The license plate said New Mexico.

This struck me as oddly full-circle: to meet cat people from New Mexico, while listening to Maron, a certified cat-lover from Albuquerque. Maybe my gratitude at still being alive was making me see cosmic connections.

I pulled into the campground and re-listened to the interview while setting up my tent. It’s a good interview, actually. When I first listened to it the day it came out, I was so excited by the idea that I didn’t really hear it. Especially when Marc asks the President, “Who are your guys?” and Obama starts comparing the craft of being president to the craft of doing comedy.

How about the craft of keeping a heavy bike upright in a sketchy situation? Maybe the reason I didn’t die is because of my years of touring experience. I didn’t panic; I didn’t clutch at my brakes; I rode through the wobbles and out the other side.

On the other hand, maybe I got wobbly because my load was unbalanced. My final purchase in Lompoc was a box of wine. The smallest size sold at the Liquor Emporium contained four whole bottles of Pinot Noir. I took the bag of liquid out of its box and packed it on my bike – a nifty trick I learned while cutting class in high school to hang out with skater boys. I’d shifted some gear around the make up for the weight, but maybe it was too sloshy. In any case, a large bag of wine is a fine way to celebrate my continued survival. (Not that I would drink the whole thing in one go. That would be gross.)

The thing about almost dying is that you feel great for the next couple days. Like, more alive than ever. And maybe that’s why I’m on this bicycle trip, to feel really alive and happy to be that way. The opposite of bored. I am not an adrenaline junkie by any means, but apparently I like a hint of death.